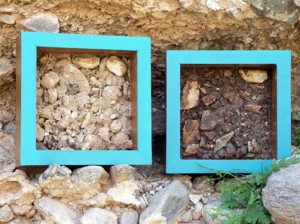 Presentation for 26th Kreuzberger Salon adapted from the book chapter of the same name in the upcoming publication, The Soil Underfoot, edited by Jock Churchman of the University of Adelaide and Ed Landa of the US Geological Society

Covered by layers of rotting leaves on the forest floor, the wavy stubble of fields and meadows, or the weed-and-litter-fringed concrete slabs of city sidewalks, soil is hidden by default. Comprehensive pictures of soils are necessary, however, to help ensure their protection. The most common images we have of the soil come from two main sources – the scientific community, with its numeric graphs and analytical descriptions, and popular media. Both are powerful and informative, but insufficient in providing imagery to truly inspire stewardship or stop soil degradation.

According to soil communications specialist, Rebecca Lines-Kelly (2004), “Science has played a major role in disconnecting society and culture from the soil that sustains it because it has studied soil in isolation… concentrated primarily on aspects of soil that make money… and has used technical, complex language that makes soils inaccessible to non-scientists. It has attempted to remove emotion and spirit from the understanding of the substance that underpins our existence and gives us life, by reducing it to part of a scientific equation…”

Popular media, on the other hand, typically rely on scare tactics and rural clichés in what Secretary General of the German Council for Sustainable Development, Günther Bachmann (2001, p. 6), calls the down-cycling of soil imagery: “The all too frequent use of archived pictures and recycled imagery by environmental media features is what environmental policy calls down-cycling – a reuse of materials at the expense of their value… As a consequence, environmental programs are often not innovative, without a unique artistic signature, without their own aesthetic” (translation from German by the authors).

In the practice of image-production, contemporary artists are expert craftspeople who use innovative techniques to make the invisible visible. For this reason, soil enjoys a special place in painting, printing, and photography (Zika 2001; Feller et al 2010) and its representation throughout art history has been analyzed (Busch 2002, Hartemink 2009, van Breemen 2010,) as well as taken on as an expressive medium within the soil science community (e.g., paintings by Gerd Wessolek and Jay Noller). Bachmann (2001 ibid, pp. 8-9) emphasizes the ability of artists to bring to the surface more than mere facsimiles of the soil profile: “The aesthetic portrayal of soil is more than just representation of what is found in nature, rather it is an image charged with metaphors and meanings. …To bring the sound of the earth to vibration …to make the color of time visible, to learn to read the soil again – the arts could show us the way…”

The 26th Kreuzberger Salon focuses on a range of contemporary artworks with the aim of expanding the scientific portrait of soil as a pedogenetic body. Together, the artworks deconstruct conventions of genetic classification by inventing new methodologies of understanding defined by sensory experience, cultural contextualization, and an intuitive collaboration with the soil itself as material guide. From the pioneering works of Herman de vries and Walter de Maria to the experimental bioart of Daro Montag, geoart of Mario Reis and street art of Jesse Graves, these works restore “a sense of emotion and spirit to the understanding of the substance that underpins our existence,” (Lines-Kelly 2004) introducing concepts of the soil beyond scientific and economic rationalism or popular imagery.

While the presented works allude to environmental protection issues and diverse underlying cultural contexts, what they mainly have in common is an aesthetic entry to the hidden realms of the pedosphere. With aesthetic entry a formalist aesthetic reading is implied, i.e., the appreciation of that which may be physically referenced not only in the formal compositions of artworks, but also in the soil environments: color, texture, form, contrast, rhythm, balance, topography, etc. (see Toland and Wessolek 2010a, Carlson 2000, and Zangwill 2001 for discussions on aesthetic formalism and the environment). All of these works are produced in highly aesthetic styles to expose the beauty, diversity and uniqueness of the soil and the landscapes from which soils develop. Other strategies focused on soil protection include e.g., political activism, social engagement, spiritual or ritual practice, creative gardening and farming, and ecological restoration. Such strategies are indispensable for a comprehensive argument on the artistic contribution to soil protection, but are impossible to cover within the scope of this presentation.

The works are loosely organized by genre, including: painting, pigmenting, printing, and artists’ archives. Beyond these categories, aesthetic awareness is also created with installation, performance, and different types of participatory engagement. By blending a range of contemporary artistic positions with scientific concepts, an attempt is made to re-imagine and re-evaluate the soil.